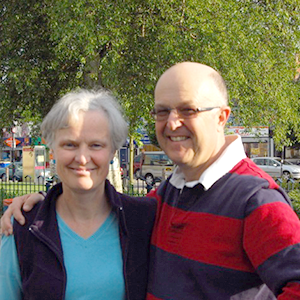 Donate to Richard and Catherine Weston
Location: Oxford, UK Sending Church: Magdalen Road Church Ministry Started: 1985 (Joined Y.E.S. 2008) Duration: Part-Time About Since 1985 Richard and Catherine Weston have been involved with ministry among international students (ISM) in a variety of roles. In local ministry they have served in both Cambridge and Oxford. Richard has also served as National Director (CEO) of Friends International 1999-2008 (www.friendsinternational.uk). From 2009 until 2021 they assisted the development of ISM in other parts of the world, including the Netherlands, Austria and South Africa. Their vision and gifting has been to pioneer and nurture ISM in new places both in the UK and internationally. They have two grown sons, a daughter in law and two grandchildren. Ministry For health reasons Richard is no longer able to travel and his ministry focus has shifted. International students continue to feature in our lives but more often it is maintaining connections with those who've long since graduated. WhatsApp messages, emails and Zoom calls happen from time to time and a number of these much-loved friends are regularly in our prayers. Day to day Catherine is involved in the local Friends International team, supporting and mentoring the next generation alongside writing resources. Richard is focussing more on helping our Oxford church think through how to be more welcoming to the ethnic minorities (including international students) who live in the area and how to enable them to hear the gospel. Personal Message In their many trips to the US both Catherine and Richard have warmly appreciated the support and affirmation of many Christian friends, old and new. We continue to need to raise 100% of our support and we are grateful for the opportunity, via Y.E.S Ministries, to have a channel for tax efficient giving from US sources. Do get in touch with us, using contact details above.
Contact
richardw@intonations.org
Catherine@intonations.org