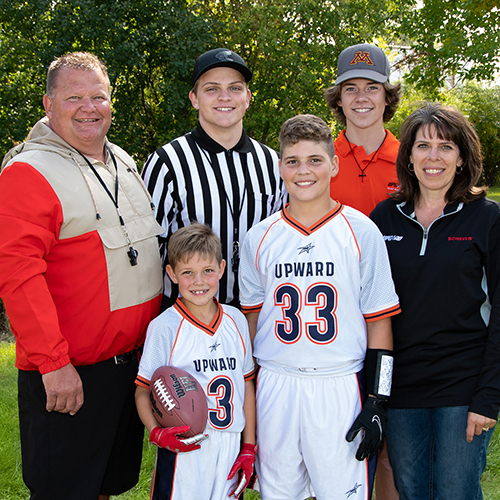 Donate to Glenn and Mindy Heinsch
Location: Fargo, ND - Moorhead, MN Sending Church: Bethel Evangelical Free Church - Fargo, ND Ministry Started: September 2014 Duration: Full-Time About Glenn and Mindy (set up by Glenn’s sister) had their first date in May 2002 – they were engaged 4 weeks later – they were married 3 months later – and had their first son 9 ½ months later. Whew!! When Glenn asked for Mindy’s father for permission to marry his daughter after only 4 weeks of dating Mindy’s father’s response was “Why should we be surprised? This is what we have been praying for!” Glenn and Mindy are now blessed with four boys; Connor, Carter, Carson, and Cayden. Glenn has served full time in church ministry since 1991 in Minnesota, Wyoming and Florida. He also had the privilege of working for the Billy Graham Association prior to being called into full time ministry. Mindy was a elementary music teacher prior to starting their family. They currently home school all four boys. Ministry Glenn serves as the Director of Community Youth Outreach (CYO) of Fargo/Moorhead. CYO is a 501c3 non-profit under which all Upward Sports in the Fargo/Moorhead area operate. The Upward ministry draws athletes from the entire Fargo/Moorhead area and surrounding communities. The Upward Sports program in Fargo/Moorhead reaches over 1200 students and their families each year with the gospel through the Upward basketball, cheer, volleyball and flag football programs. Gospel truths are shared at every practice and game. All games/practices take place at six different church/school campuses throughout the year. When Glenn arrived in Fargo/Moorhead in the Fall of 2017 his vision was to expand Upward Sports in Fargo/Moorhead from just basketball and cheer to include flag football and volleyball making it a year round ministry. Due to God’s blessing this vision became a reality 6 months after the Heinschs arrived. Prior to their arrival in Fargo/Moorhead Glenn served as the Upward Director at Celebration Community Church in Celebration, FL from 2014-2017. Upward Sports Inc. is the world’s largest Christian youth sports provider. It ministers to over a 500,000 youth each year through basketball, cheering, flag football, baseball, and soccer. It’s headquarters are in Spartanburg, SC.