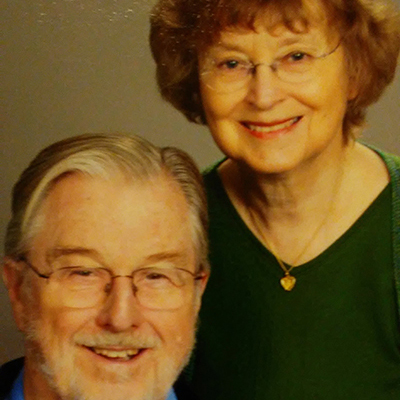 Donate to Ned and Sharon Hale
Location: Great Lakes Region Sending Church: Christ Presbyterian Church Ministry Started: February 2005 Duration: Part-Time About Ned Hale’s career, after theological seminary, has been with the InterVarsity Christian Fellowship in various leadership roles from 1962-2006. He spent one year on sabbatical study leave doing graduate research at Benares Hindu University in India as continuing preparation for his specialized focus on “International Student Ministries” (ISM). He was the National Director of that ministry from 1981-2000. Ned was also one of the founders, starting in 1981, of the national Association of Christians Ministering among Internationals (ACM). He has addressed many annual ACMI conferences, which drew together Christians of all church backgrounds from all over North America who are interested in internationals. From 1988-2000, Ned Directed a follow-up to InterVarsity’s Urbana Student Missions Convention, which was a conference for Christian International Students throughout North America and was attended by 500-800 Christian internationals from 70-80 countries of the world. He has directed and spoken at many Christmas holiday conferences, designed for international students from any religious background and from every ethnicity and nationality. In 2006 Ned joined with New College Madison and other church and parachurch groups to celebrate the 200th Anniversary of the “Haystack Prayer Meeting” (held at Williams College in Williamstown, Massachusetts in 1806), which was the seedbed for the launching of the modern Protestant missionary movement in North America. From 2003 to 2012, he was on part-time staff with ACMI where he was responsible for developing ACMI’s “Ministry Resources” for their website and conference seminars. He also did research on special projects for ACMI. Both Ned and Sharon have been elders at Christ Presbyterian Church in Madison, Wisconsin where they have lived since 1973. They helped the church develop its program for internationals at the University of Wisconsin in Madison (including a host-family and English language program as well as a pro-bono legal advice clinic). Sharon became a psychotherapist, receiving her master’s degree in clinical social work in 1984 at the University of Wisconsin, Madison. In recent years she has made short-term mission trips to Nigeria where she has taught missionaries and Nigerian child care workers and has worked with children at a center for street children in Jos, Nigeria. Ministry Ned and Sharon are continuing these various cross-cultural ministries in Madison as YES missionaries. Ned continues the tradition of the “Haystack” missions conference by leading a monthly book discussion of recently published or “cutting-edge” books focused on “Missions history/theology”. While Ned leads the discussion from his office in Madison, some participants join the discussions via Zoom from other countries and other parts of the US. Since 2006 Ned has been volunteering as the National Archivist for InterVarsity. This ministry has involved essentially “preserving the memories of our peoples.” Ned currently spends time collecting historical materials and gives “whole-life” interviews to prominent figures in InterVarsity from past decades. To date, he has logged over 100 interviews of 1-5 hours in length; he has plans to do many more in coming years. Sharon has developed her counseling skills and currently continues with her work as a therapist and consultant to church leaders. She also has a continuing interest in Nigeria where she grew up as a missionary’s daughter. Personal Message Jesus Christ makes it clear that we are to love our neighbor as we love ourselves (Matthew’s Gospel chapters 5-7). In the increasingly “global village” of our world, what better way is there to foster peace and harmony in our world than to love the “stranger in our very midst” (Leviticus 19:33-34)? International Student Ministry is one of the most strategic opportunities we have to influence future world leaders now being educated on North American campuses. As Christians we share the Gospel of God’s redeeming love, but whether any respond to that message or not, such leaders can never go back to their home countries without knowing that they have been welcomed and hosted by those representing both America and the Church of Jesus Christ.
Contact
608-334-5418
608-438-2994
ned.hale@intervarsity.org
centerpoint88@hotmail.com